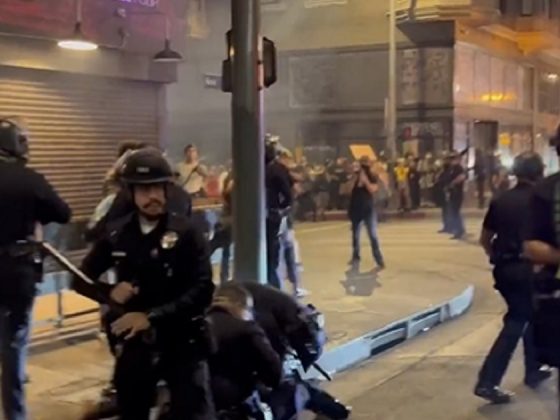 For Americans who’ve spent years with Barack Obama in the public eye, this might be hard to believe.

But after eight years in the White House, three full-blown autobiographies and countless public appearances where the issue of race has either been the main topic of talk or was bubbling just beneath the surface, the 44th president still has at least one story he never told before.

And he was striking a blow against racism — literally.

In an episode of his podcast “Renegades: Born in the USA” released Monday with the liberal singer Bruce Springsteen, Obama brought up a hitherto unknown episode from his teen years in Hawaii, when a then-friend called him a racial slur during a locker room confrontation.

Listen to the anecdote below. It starts at about the 28:40 mark.

“And one time we got into a fight and he called me a c—,” Obama said, using the racial slur that rhymes with “soon.”

“It’s one of those things where he might not even known what a c— was — what he knew was, ‘I can hurt you by saying this,'” Obama said.

“And I remember I popped him in the face and broke his nose. And we were in the locker room. And suddenly, blood’s pouring down. And it was just a reaction. I said, ‘What?’ and I popped him.

“I explained to him, I said, ‘Don’t you ever call me something like that,” Obama said.

For Obama watchers, the story had to come as some surprise, since nothing like it has ever even been hinted at before. As The Hill noted with considerable understatement: “It is believed to the first time the former president has discussed the incident publicly.”

Now, in the pantheon of convenient memories of Democratic politicians, this might not rank up there with some of the greats.

And Obama’s vice president, Joe Biden, the man who now holds the title of president of the United States, is probably the national champion of self-serving story-telling, such as witnessing a battlefield Silver Star ceremony that never happened, or getting arrested in South Africa trying to see Nelson Mandela (also never happened) or marching in the civil rights movement (again, never happened).

Unlike Clinton’s sniper-fire story, or Biden’s countless Walter Mitty escapades, there’s a quality of near-credibility to Obama’s story. For instance, he was, undoubtedly, a teenager at some point. Probably played basketball, and in all likelihood had a friend.

So the story can’t be dismissed out of hand. The problem is that it’s only coming up now.

Barack Obama has been a part of the American public conversation since making a splash with his speech during the 2004 Democratic National Convention, and that conversation has been very much about race for all of Obama’s political career. But it doesn’t come out until now that he was physically fighting against racism even as a gangly youth?

Awesome. Give us the name. Should be easy to check this story.

And after that he blasted some tupac, lit up a joint and exit the room poplocking and everyone clapped

2 autobiographies and one memoir, and we are for the first time every hearing about this? 🧐

Things that never happened for $500 Alex!

It’s important to keep in mind that Obama has never been above playing a race card when it suited his political purposes. This is the man,  remember, who threw gasoline on the fire of the Trayvon Martin shooting in 2012 by declaring “If I had a son, he would look like Trayvon.”

The fact that there is very good reason to believe that Martin was engaged in a brutal attack on a neighborhood watch volunteer named George Zimmerman at the time of the shooting was not part of Obama’s equation at the time, and never became part of his conversation later.

It’s entirely possible, of course, that a politician like Obama could have spent almost two decades in the national media spotlight and kept silent about this story.

It’s possible he never found an opportunity to say a word about it when the national obsession with racial questions peaked over the Martin shooting, and again over Michael Brown in Ferguson, Missouri, and Eric Garner in New York City and, of course, George Floyd in Minneapolis.

It’s possible that in the era of the Black Lives Matter movement, this kind of incident really did take place and Obama never so much as mentioned it before.